Building Integrated Photovoltaics (hereafter, BIPV), plays an important role in achieving the ambitious decarbonization targets of the European Union. In 2021, BIPV plants are installed all over the world, even in countries without defined goals in terms of capacity installed and/or a structured regulation scheme, that might aim to manage and drive the growth of the market.

A key element, to support the review of laws, regulations, and incentives, is the dissemination of best practice and the sharing of principles with stakeholders and all the market players including industry, public administrations, utilities, associations, regulators, certification bodies, architects, engineers, and citizens.

This knowledge sharing is a two-way process: on the one hand there is dissemination, on the other there is feedback and input from stakeholders and market operators.

Dissemination of best practice and the sharing of outcomes is the main objectives of this report. In addition, we report results achieved in Italy, where out of the 21,6 GW of total PV capacity installed at the end of 2020, around 2,5 GW are BIPV plants. This 2,5 GW has been incentivized under the feed in tariff (FiT) law managed by Gestore dei Servizi Energetici (hereafter, GSE). GSE is a stock company, owned by the state, charged with implementing energy policies concerning renewable energy systems (RES) and energy efficiency through incentives. GSE supports sustainability among public administrations, industries, and private citizens.

The path towards BIPV in Italy started in 2005 with the introduction of the FiT law. The process is ongoing, with feedback from stakeholders in the BIPV industry (Italian and foreign) received through to the beginning of 2021. These stakeholders, with whom GSE keeps long-lasting relationships, contributed to defining the successes and the critical issues related to the FiT law in Italy, that are analysed in this report. This is a learning process of innovation on topics, technologies, and European patents, which did not stop at the end of the FiT Law.

The scope of this report is to provide a review of the implementation and outcomes of a BIPV incentive policy in terms of capacity installed, and in terms of progress in establishing a new culture among all stakeholders of the BIPV market, an approach that might be extended to other countries.

In this sense, success can also be found both in the significant uptake of BIPV and in the cultural change that has meant the BIPV market continues to thrive in Italy, even after the FiT era, with stakeholders willing to invest in BIPV projects.

Success is a common and shared path.

After highlighting the policies concerning FiT implementation, this report provides the definitions of the requirements to access incentives. Briefly highlighted, these are:

Chapter 4 reviews the data relating to BIPV plants accessing the incentives of the FiT Law with details of the different typology of components, the related costs and the particular incentives granted. In this chapter, the difficulties faced by the GSE on several topics (including dissemination) is discussed, with the two-way process implemented throughout. Results from publications, focus groups and meetings with operators are included. Chapter 4 emphasizes the results (innovations) obtained, the performance of components, the new designs that consider integrations with the entire building envelope, and the new attitude and confidence of operators in sharing new BIPV solutions, often backed by the FiT incentives.

Chapter 5 reports critical issues, as highlighted by the operators; one among them is the claimed cost of certification for PV modules, which is still relevant today.

In Chapter 6, answers to the surveys of industry stakeholders, interviewed over the years following the FiT Law between 2013 to 2020, are discussed. These reveal a BIPV market showing ongoing cost reductions that contracted immediately after the FiT law ended and has seen a recovery since 2017. In the questionnaires, BIPV producers presented their existing products and their vision on the possible future for BIPV in Italy.

Answers from the industry make clear that a new culture has emerged, despite the existence of some critical issues. This is confirmed by the fact that some regions in Italy, even after the incentive period, continued to apply the GSE BIPV guidelines in order to access regional incentives or request funding. Moreover, in the same period, many Innovative BIPV plants have been installed to access the net-billing scheme and tax deductions. As a result, a BIPV market, together with knowledge and culture, still exists in Italy.

The report ends with chapter 7, where some suggestions for future policies are given.

This report is mainly intended for policy makers. The analysis of the effectiveness of the Italian FiT policy was conducted over a few years after the end of the FiT Law in order to understand if a BIPV market and a cultural shift towards the integration of PV in buildings still exists in Italy.

Barriers to a full deployment of BIPV still exist, but with a shared process involving all the stakeholders, these barriers can, over time, be solved. This report shows a possible way to build this process and the main topics and challenges to be faced. 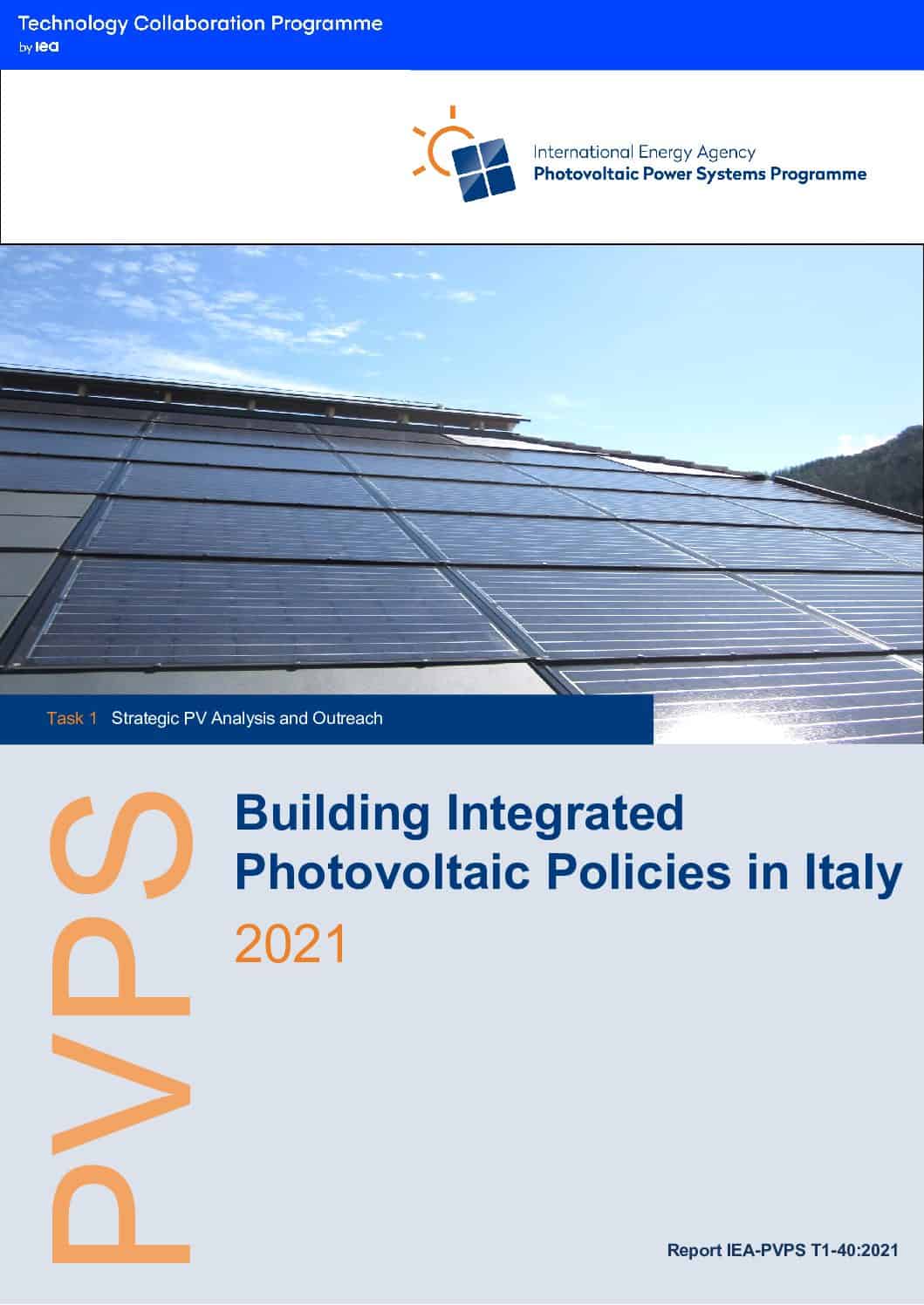