This new 2019 edition of the IEA PVPS report Trends in Photovoltaic Applications browses 24 years of PV installations in the IEA PVPS member countries and many others. Policies to support PV deployment, industry development and the integration of PV in the power sector are analyzed in-depth.

In 2018, at least 103,2 GW of new PV capacity have been installed worldwide, almost as much as the 2017 installation level. Revised PV market data show every year some increase due to updated statistics in different countries, 2017 updated numbers pushed the installations above the 103,6 GW mark, reaching 409,1 GW in total.

The stabilization of the market in 2018 hides anyway some major developments on all continents, which are continuing in 2019: PV develops  fast  thanks  to  its  improved  competitiveness  and  more efficient  policies  for  distributed  PV  applications.  However,the decline of the Chinese PV market in 2018, driven by the willingness to control the booming market and the necessity to contain the rise of electricity prices, hide completely the global growth. This trend is visible in 2019 as well, while the growth is global, a declining level of installations in the largest market might again lead to a reduced global growth. Distributed PV represented a bit more than one third of all PV installations, while utility-scale continued to dominate  the  installations.  Floating  PV  passed  the  GW  of cumulative  capacity  for  the  first  time,  while  agri-PV  develops, especially in Asia. BIPV continued developing at a low pace while the first VIPV systems integrated in EVs are expected soon.

Policies evolved towards more competitive tenders for utility-scale PV  but  also  for  distributed  installations.  Feed-in  tariffs  were  still dominant  but  decreasing  while  net-metering  was  still  being implemented  in  new  countries  and  phased-out  in  favor  of  self-consumption in others. Collective and decentralized self-consumption policies are being tested or cautiously implemented in new countries while merchant PV was gaining ground in few markets. In a nutshell, distributed PV was still hampered by difficulties to set-up adequate policies in dozens of emerging markets.

At the same time, production capacities increased in all segments of the PV value chain, mostly in Asia but not only. Such increase led to a new imbalance, which from June 2018 pushed the prices of all components low and reduced the margins, increasing again the competitiveness of PV solutions.
Monocrystalline wafers and cells started to dominate the market again  in  2018,  while  bifaciality  is  being  rolled-out. In  general, modules and cells technologies are bringing an increased variety of end-products to the market: different back-sheets, glass-glass modules, half-cells and shingling are bringing more opportunities. Cell technology saw some MWT and HJT developments, while CdTe has experienced a major market push in 2018 and 2019. Battery  storage  has  continued  to  develop  in  support  for  utility-scale PV and in a limited number of countries for small-scale PV.

With more than 512,3 GW installed at the end of the year 2018, PV  could  provide  almost  3%  of  the  global  electricity  demand. Much more would be needed to decarbonize the energy sector and  fulfil  the  COP21  agreement.  While  some  countries  start  to take PV seriously, most haven’t yet considered the full potential of an energy source which went below 0,02 USD per kWh in the most competitive tenders.
PV  capacities  at  the  end  of  2018  save  every  year  close  to 600 Mtons of CO 2 eq emissions, which represents a reduction of 4,5 % of the power sector emissions. A higher percentage compared to the  energy  share  because  PV  is  massively  installed  in  countries having highly carbon intensive grid mixes, like China and India.

As a conclusion, the fast development of PV is still too dependent on  a  limited  number  of  countries  but  in  general,  the  current growth path appears more sustainable than what it used to be. The PV era is just about to start. 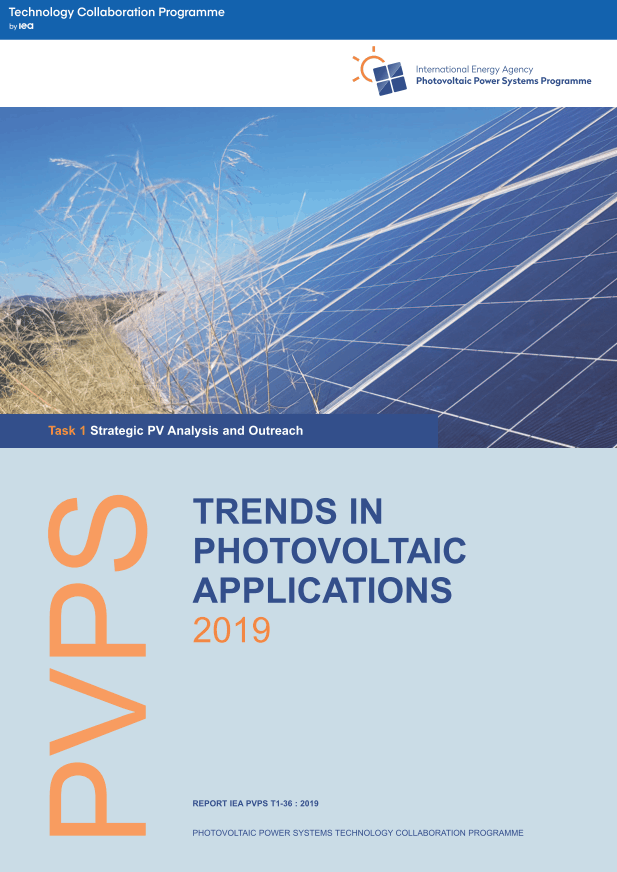