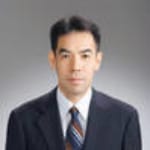 The world very large deserts present a substantial amount of energy-supplying potential. Given the worldwide demand in energy in the 21st century and global environmental issues, the potential for harnessing this energy is of huge import and has formed the backbone and motive for this Task 8.
The objectives of the Task 8 were to examine and evaluate the potential of very large-scale photovoltaic power generation (VLS-PV) systems, which have a capacity ranging from several megawatts to gigawatts, and to develop practical project proposals for implementing the VLS-PV projects in desert countries.

Task 8 activities were organized as follows

In Phase 1 (1999-2002), key factors that enable VLS-PV systems feasibility were identified and the benefits of this system’s applications for neighboring regions were clarified as well as the potential contribution of system application to global environment protection and renewable energy utilization in the long term was clarified. Mid and long-term scenario options for making VLS-PV systems feasible in some given areas were also suggested.

Based on the mid and long-term scenario options of Phase 1, in Phase 2 (2003-2005) case studies on VLS-PV systems were carried out in depth and practical proposals for demonstrative research projects on pilot PV systems suitable for selected regions, which enable sustainable growth into VLS-PV Systems in the future, and general instruction to propose practical projects for large-scale PV system were discussed.

In Phase 3 (2006-2008), toward a realization of VLS-PV Systems, specific discussions from viewpoints of socio-economic, financial, technical and environmental aspect were carried out, and VLS-PV roadmap towards 2100 was proposed.
Task 8 started its Phase 4 activity in 2009 until 2011. In Phase 4, for accomplishment of Task8 activity, implementing strategies and engineering designs for VLS-PV projects were discussed and proposed. Various kinds of environmental impacts were evaluated, and in depth feasible technical options were discussed. Based on the discussion including previous phases, VLS-PV proposals which would be useful for stakeholders were developed.

Energy from the Desert

Task 8 has achieved a comprehensive analysis of all the major issues of such large-scale applications, based on the latest scientific and technological developments at the time and through close international cooperation of experienced experts from different countries.
The first concrete set was: “Energy from the Desert – Feasibility of Very Large-Scale Photovoltaic Power Generation (VLS-PV) Systems”, in 2003. The publication is well-known all over the world, especially, in desert countries. Some countries and regions are referring to that publication for developing their vision of PV deployment.
Since the 1st edition, Task 8 studied and proposed more in-depth, realistic and practical, demonstrative approaches toward the realization of VLS-PV in different deserts of the world: e.g. the Mediterranean region, the Middle East, Asia and Oceania. These results were published, in January 2007, entitled “Energy from the Desert – Practical Proposals for Very Large-Scale Photovoltaic Systems” to show new knowledge how to make Very Large-Scale PV Systems happen in the desert.
In September 2009, Task 8 published the latest report entitled “Energy from the Desert –Very Large-Scale Photovoltaic Systems, Socio-Economic, Financial, Technical and Environmental Aspects”. This motivated expected stakeholders to realize VLS-PV projects in the near future. Moreover, a series of proposals from different viewpoints and directions enabled Task 10 to provide essential knowledge or detailed practical instructions in order to realize the sustainable implementation of VLS-PV development in the future. 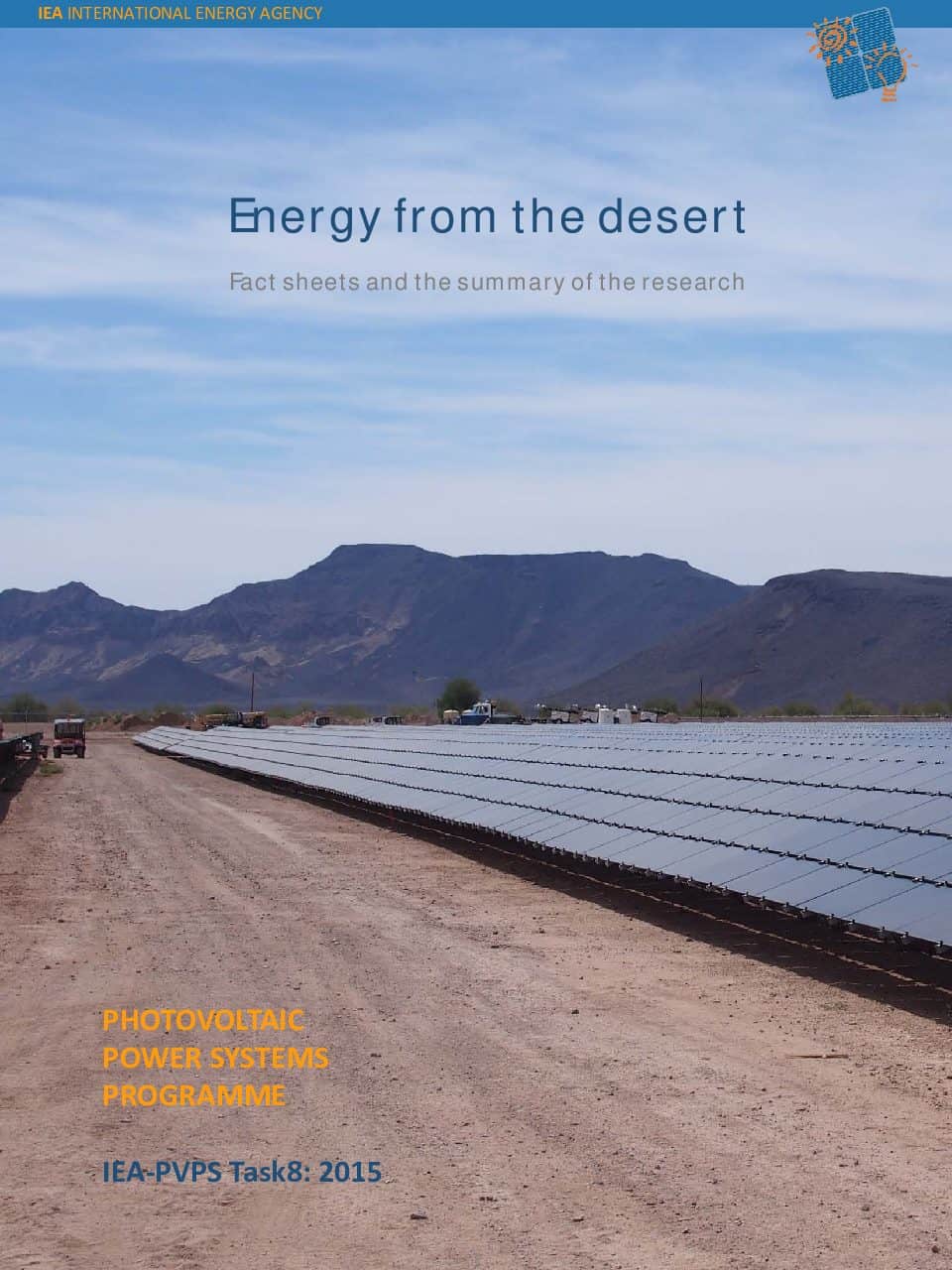 Energy from the Desert - Brochure Factsheets - 2015 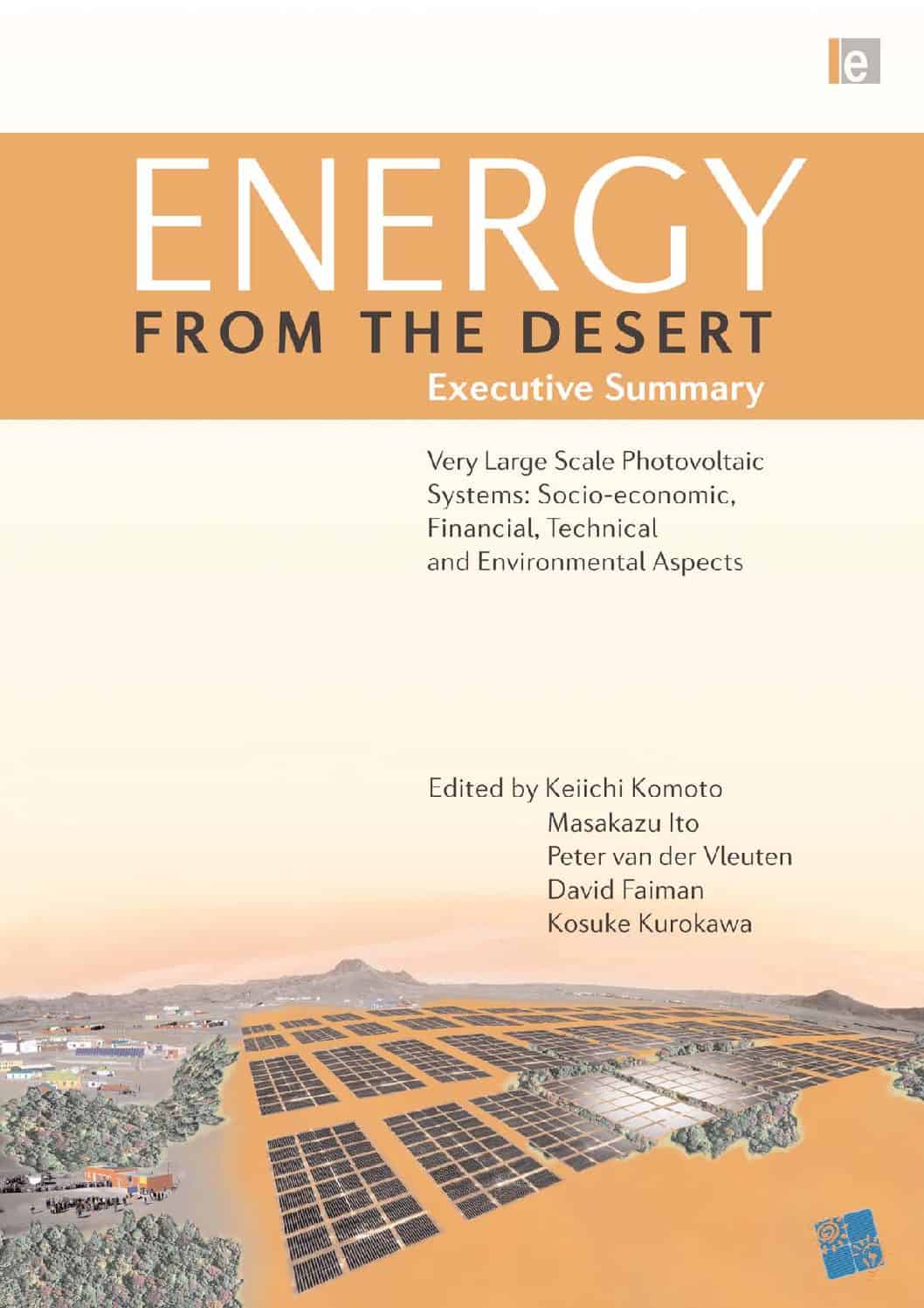 Energy from the Desert - Summary - Edition 2009 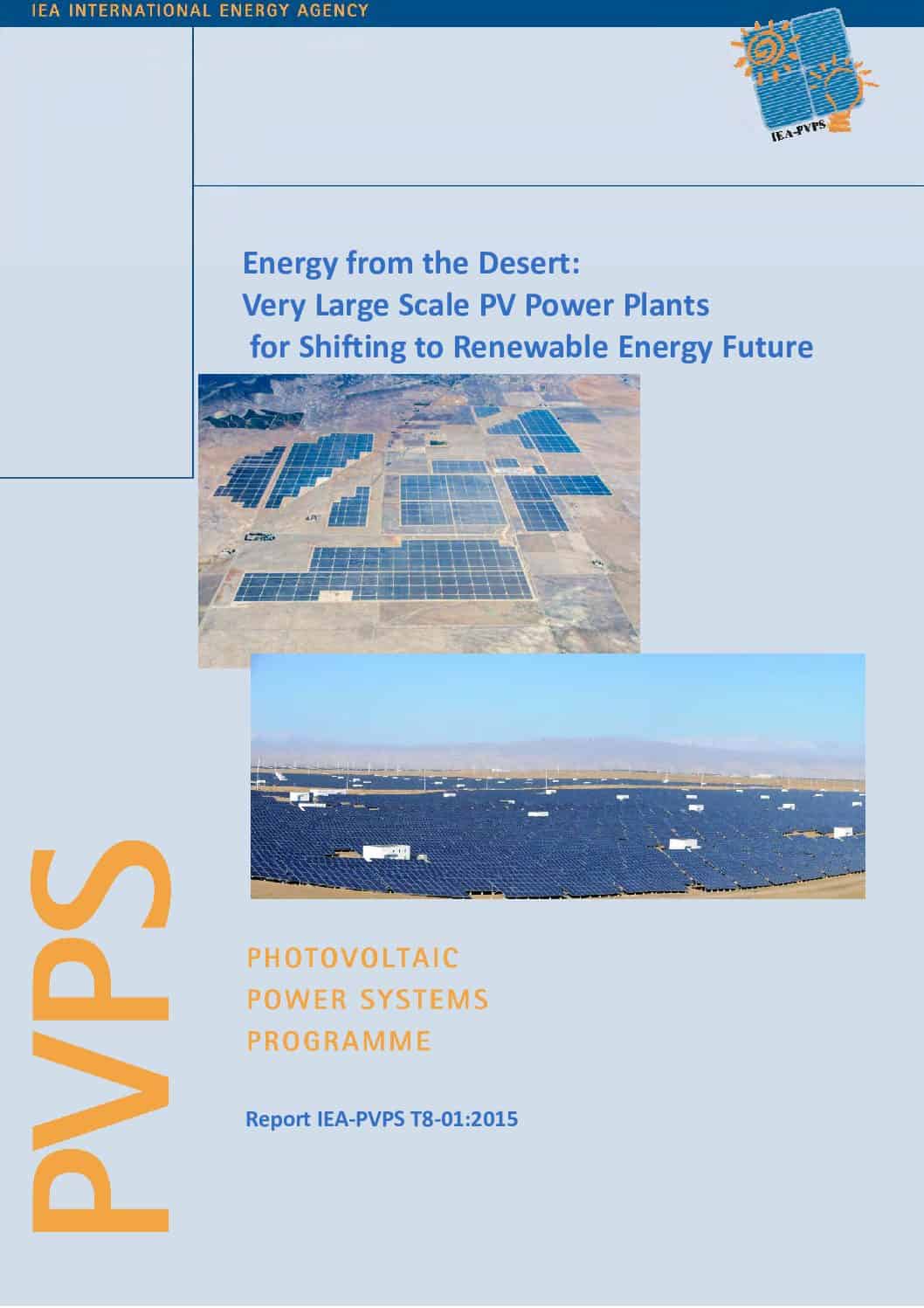 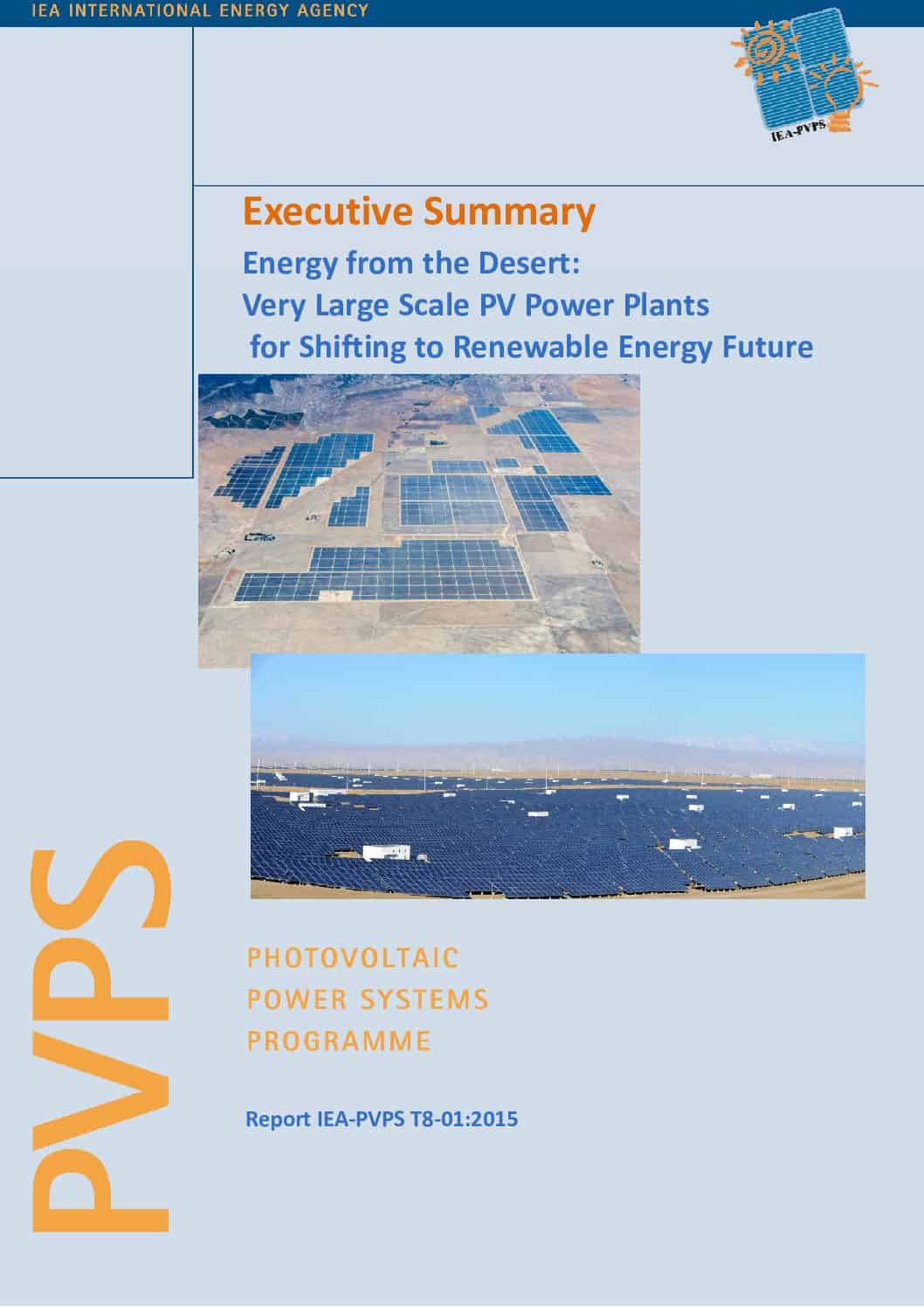 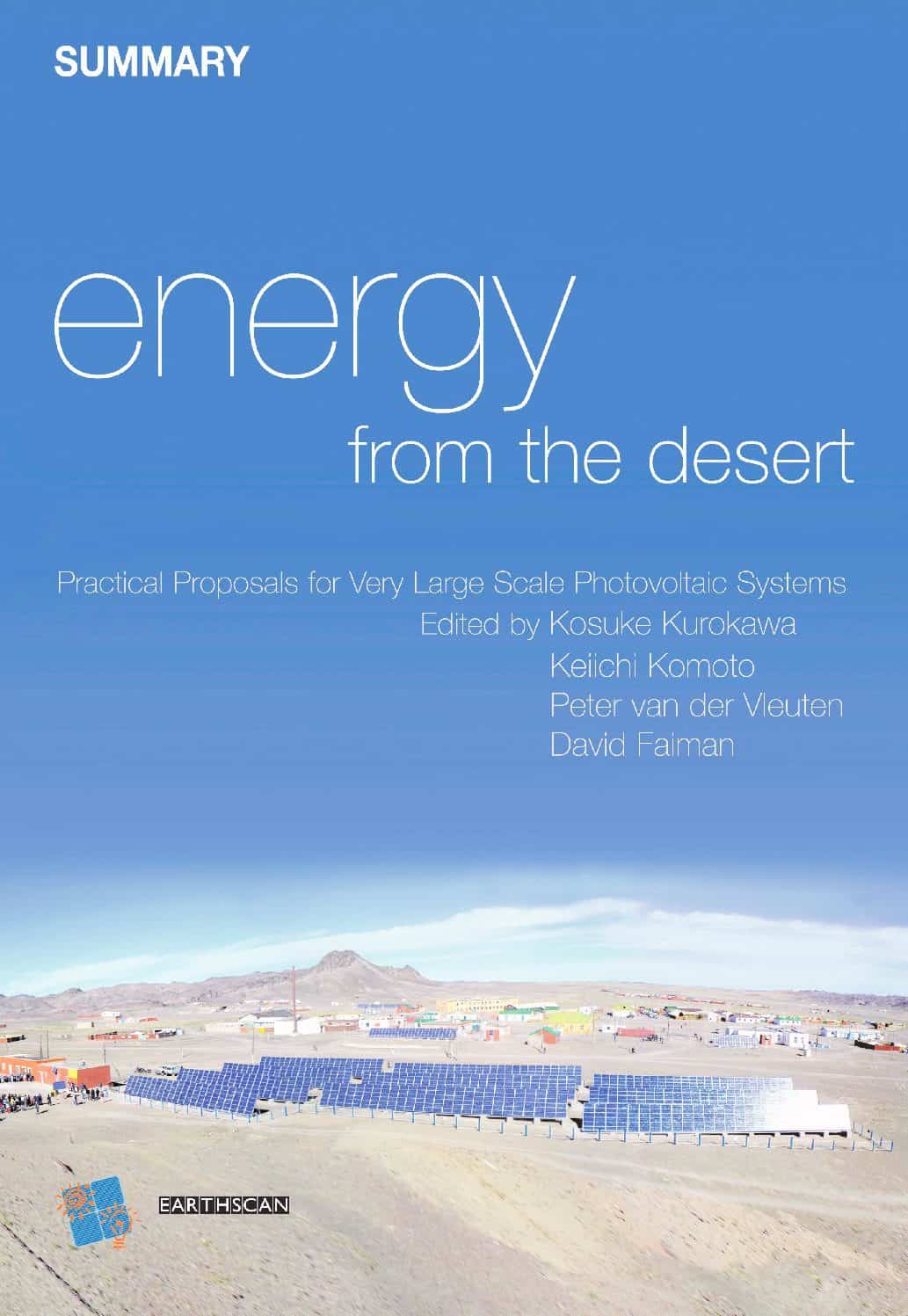 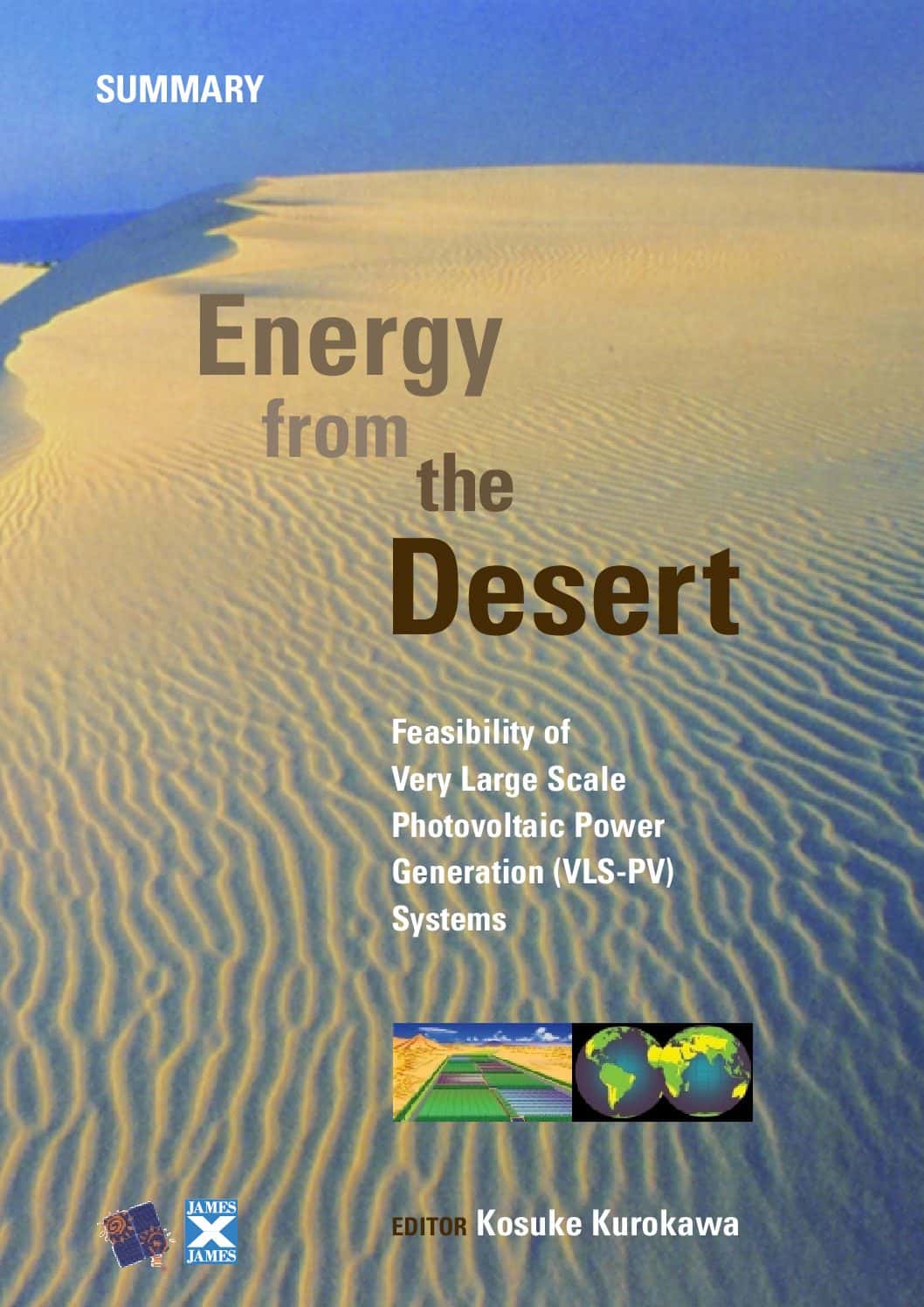